This is the second part of our Intro To Django Tutorial, if you haven't gone through our previous tutorial please make sure to check it out.

In this part of tutorial, we are going to do our migrations, create a sign up form and stuff.

So we need to think of our TodoApp features & functionalities first.

So these are the features that we are going to work on.

Whenever we are working on this kind of projects or any big projects where there are multiple functionalities and moving pieces like here in our todo there is signup, signin, creating todo's, listing todo's and all, sometimes it's harder to think like where should I even start the project.

I would like to first SignUp in the website then, I will be able to login, then I will able to add my todo's, see all todo's, update or delete them when needed.

This gives us a clear idea where to being the project, like we need to implement user SignUp first, then we can work on login, logout and then we can move into creating todo objects, listing them, updating them and so on. If we kind of follow this flow, it will be really helpful for us to know where we are moving in our project.

Let's go to our project folder named todo and run the server.

You can see it's giving us an warning saying "You have 17 unapplied migration(s). " so let's do the migrations, to do it run

According to documentation, Migrations are Django’s way of propagating changes you make to your models (adding a field, deleting a model, etc.) into your database schema. They’re designed to be mostly automatic, but you’ll need to know when to make migrations when to run them, and the common problems you might run into.

Then I need you to create an HTML file called 'signupuser.html'. If you didn't understand whatever I have written here, just look at the project structure 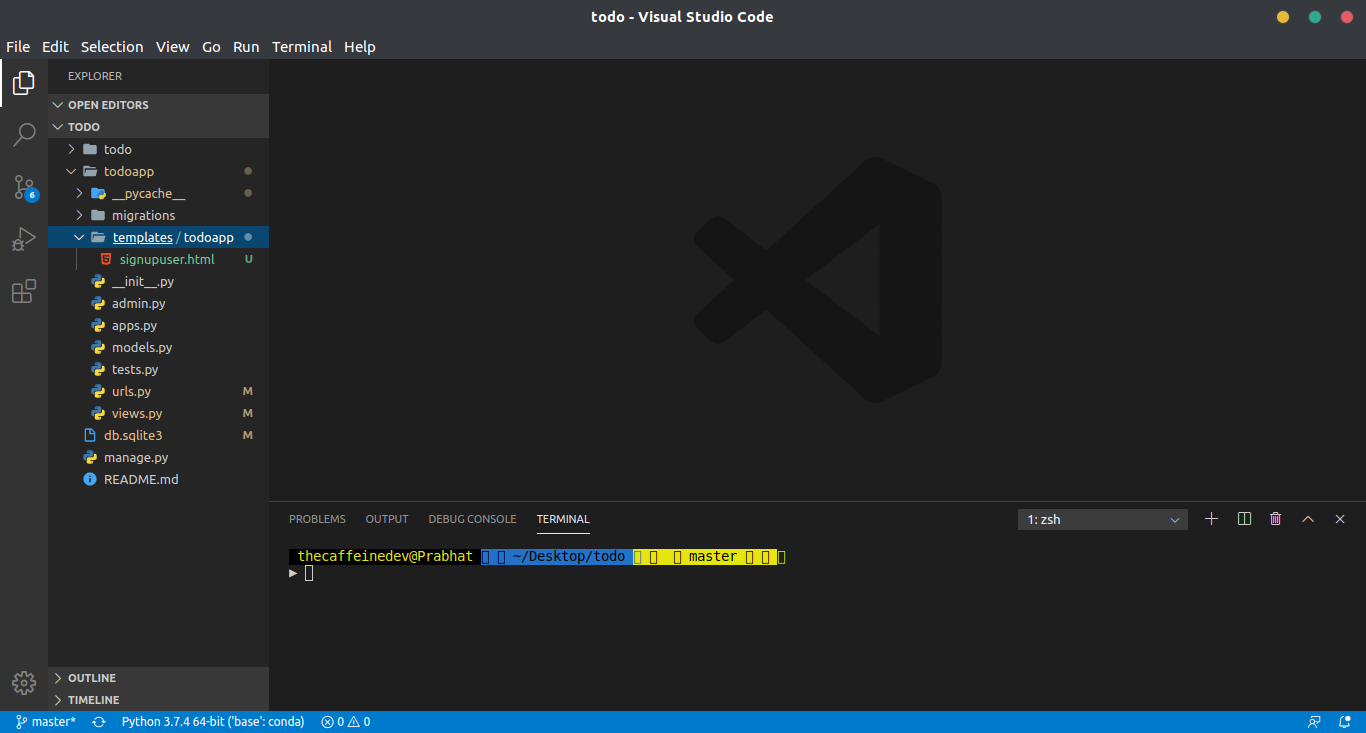 Make sure to follow the same names and same folder structure. If you still get confused, you can checkout my Github repo for code.

Now open the 'signupuser.html' and edit it out with the code below.

Now open the views.py inside the todoapp folder and remove the code which was written in our previous section and replace with this code.

I hope this code is self explanatory, here in the first line we have imported render, which simply renders HTML templates. We have already talked about HttpResponse before.

Then we have created a signupuser function which takes a request and it returns us the signupuser.html file.

Let's edit the Urls.py file inside our todoapp folder. Remove the code which was written in our previous tutorial and replace with the code below.

Again we have went through this code structure in our part-1 of the tutorial series. Here we have added the path "signup/".

You will see the page below, if you are not able to see, you have done something wrong in the process. 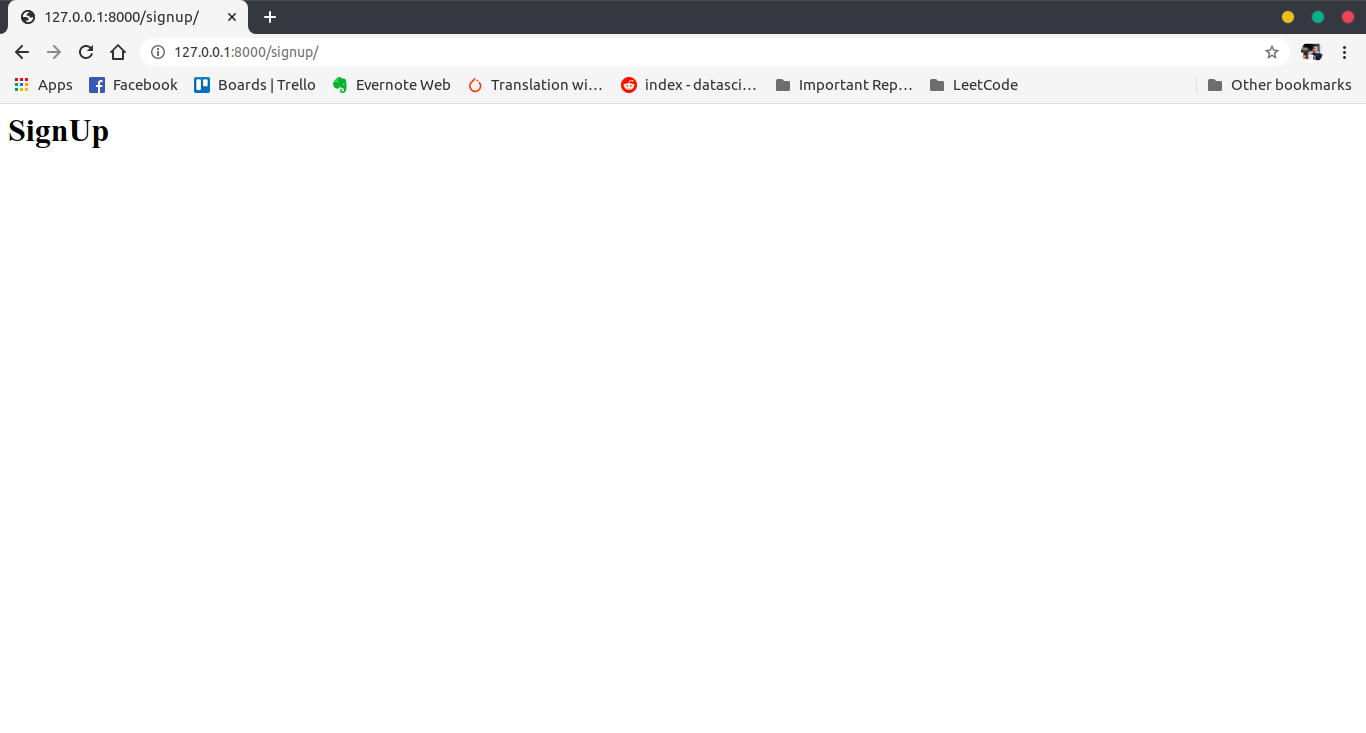 Now just we are simply rendering the HTML templates, for now there's nothing except the SignUp header. Later we will add design and make it look good.

Django has some built in tools that you can use to set up the ability for users to log in and log out of a web application.

The most simple way to implement a user sign up is by using the UserCreationForm. If you are wondering where this form came from, remember Django comes with some of it's in built apps. The auth app provides this form.

So now let's open view.py and edit it out with the code below.

Here what's new in this file, in the 3rd line you can see we have imported the UserCreationForm. This UserCreationForm gives us a basic form and we can pass it forward to our templates.

In the line 8, we have added a dictonary where the key is the form and the value is UserCreationForm() object.

Read more about why we used the dictionary in the above code from documentation.

To simply understand now, we can pass the form object to our HTML template by using the UserCreationForm Object. Read more about it here.

So this Django in-built UserCreationForm gives us a basic form. If you didn't get the syntax which we have used in the signupuser.html file. You can read more about it here.

Here we have added HTML form. And the method is POST. POST is for writing data, meaning data will be submitted. 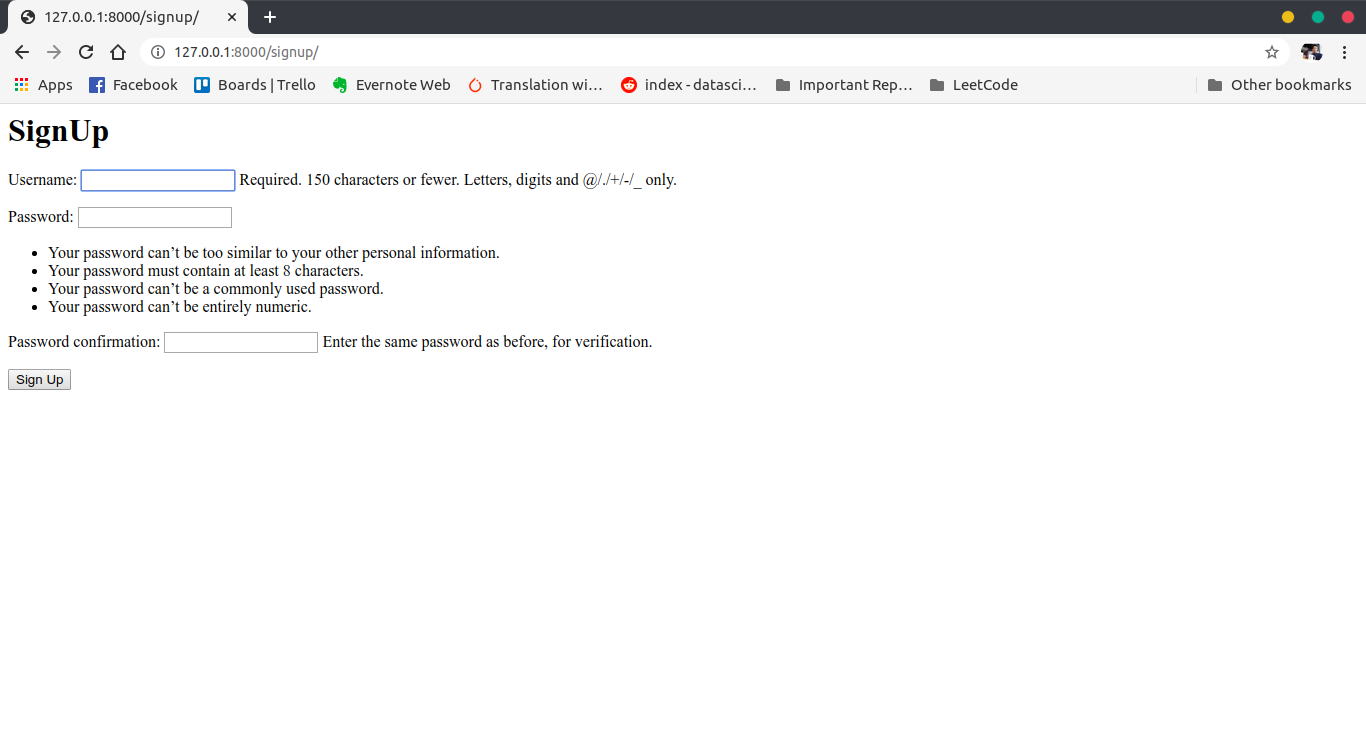 Now if you try to fill in some details in the form and if you press submit button you will get this error below. Make sure to try it out so that you understand things better. 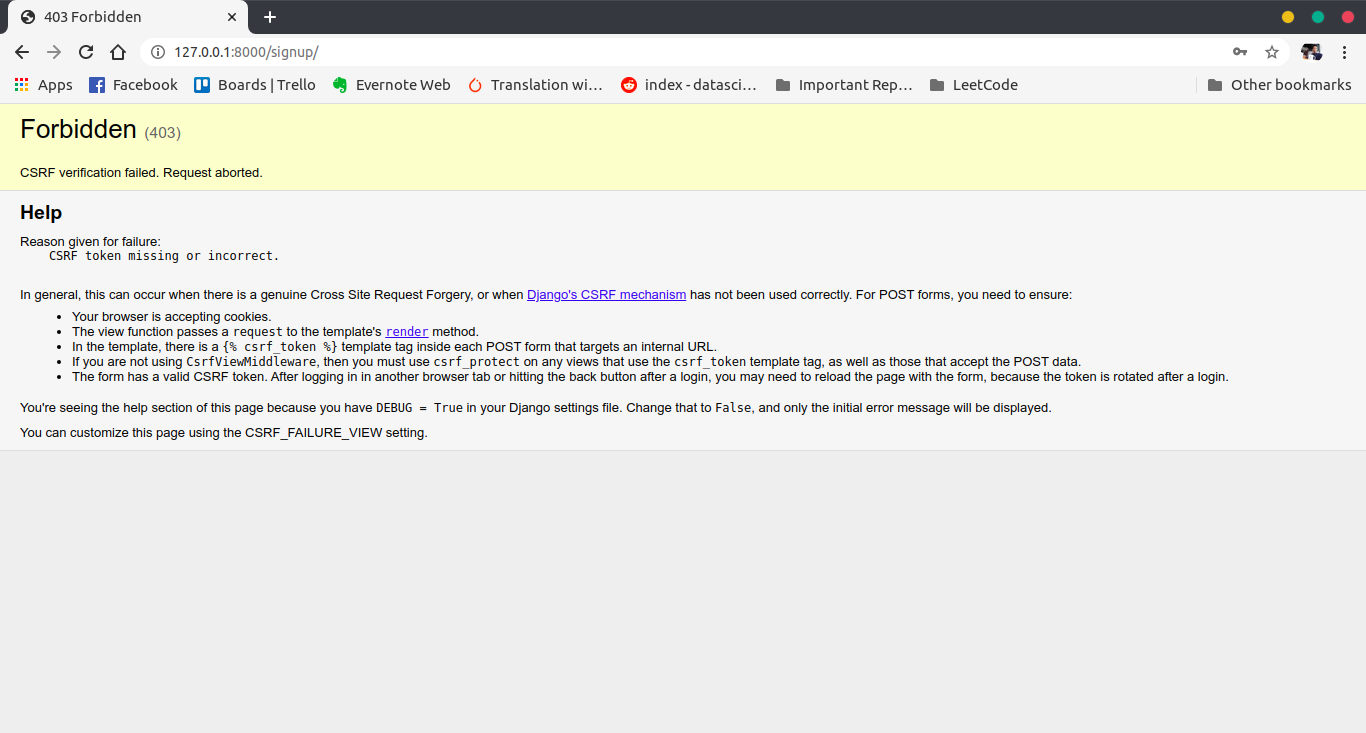 Now we got the error saying CSRF token missing. To fix this error

We have added something called csrf_token

Now if you try to give some inputs and submit it, you will not get any error.

So that's it for this tutorial, I hope you understood most of things from here. Try to read more from the links that I have referenced in the tutorial.

You can get code for this second part from my Github Repo.

So that's it for this tutorial series. I am not going to make any more part on this thing. This part is an optional tutorial of how to think more and build more features if you are building some apps.